Scanning slit technology wins
DOYLESTOWN _ “International surgeons favor the scanning slit excimer for laser vision correction. The results are simply better” claims Barry Fabriziani, OD. Dr. Fabriziani has practiced in the community for over fifteen years and is one of the most experienced eye doctors in LASIK pre- and post-operative care.
“The advances in laser technology and Dr. Lewis’s extensive corneal experience have made me a strong proponent of LASIK as an important option for my patients wearing glasses and contact lenses.” Fabriziani says.
“The progress in excimer laser technology has been critical to the success of this procedure. LASIK is now mainstream”, Fabriziani feels.
The excimer laser was originally developed by IBM for use in the semiconductor industry. It didn’t take long before scientists realized it was remarkably accurate at shaping corneal tissue.
While some laser manufacturers concentrated their efforts on simplistic and now outdated broad beam techniques, NIDEK developed a sophisticated scanning slit approach.
“Instead of blasting away precious corneal tissue, NIDEK uses a software-driven design that scans the cornea and gently removes tissue. The slit paints the cornea and fashions the ideal optical shape”, said Dr. Fabriziani.
“The technology behind the NIDEK EC-5000 laser has been recognized internationally. I was sold on scanning-slit technology when I learned many experienced refractive surgeon’s chose the NIDEK when their friends and family needed LASIK” claimed Dr. Fabriziani.
Dr. Lewis will describe the progress of excimer laser technology in next week’s Intelligencer.
Laser frees area residents from their glasses and contact lenses
Interviews by
SUE CROSS

George Foley had surgery last week. His wife, Suellen Foley, is pictured just minutes after her LASIK procedure. Both enjoy 20/20 vision without glasses.
HUNTINGDON VALLEY _ “There were no surprises, the procedure was painless”, said Suellen Foley.
James Lewis, MD, performed her LASIK procedure last week. Mrs. Foley is shown above with her husband minutes after her laser vision correction.
“The next morning I saw the alarm clock and jumped out of bed”, she exclaimed. “I looked in the mirror to see if there were signs of the operation. I couldn’t see any evidence I had the LASIK surgery less than twenty-four hours ago!.”
Suellen was amazed. “Then I realized I was looking at my face without my glasses and I could see”, she continued. “The procedure was painless, there were no surprises, and I wasn’t nervous”.
Ms. Foley investigated LASIK providers in the area but she had a distinct advantage. She made her husband go first!
George Foley had LASIK by Dr. Lewis the week before. Mr. Foley said soon after his surgery, “there were no surprises and during the procedure I felt minimal discomfort. I am happy to drive at night without glasses”.
Suellen continued, “I wasn’t nervous and I am a walking advertisement for Dr. Lewis”.
LASIK is rapidly becoming the most popular eye procedure both nationally and internationally.
Many think LASIK is a modern version of RK (Radial Keratotomy) developed in the former Soviet Union. It isn’t! The true birthplace for LASIK is Bogata, Columbia.
In 1949, Jose Barraquer began sculpting the cornea to change its shape and reduce dependence on glasses and contacts. American scientists and physicians helped the international effort and refined the process. Thanks to brilliant intellects from Italy, Greece, South America, Canada, France, and the United States LASIK was born.
Dr. Carmen Barraquer (Jose Barraquer’s daughter) continues to make important contributions to the science of LASIK at the Barraquer Institute in Bogata.
The FDA, known for its conservative approach, first approved LASIK several years ago. Sources estimate nearly two million LASIK procedures will take place in the US alone in 2001.
Suellen and George Foley are happy to be in that growing number of local patients who have benefited from over fifty years of science, technology, and medicine.
Willis Houston (shown below) also had his LASIK surgery last week.
Mr. Houston reported, “The surgery was better than my expectations and I am thrilled that I was 20/20 on my first day.”
Like others, Mr. Houston is most excited he can drive without his glasses. He added, “the surgery has made me look younger”.
Dr. Lewis, who has performed over 4000 procedures in the last two years said, “I am always amazed with the feeling of freedom these patients describe. It is like they have been held back from enjoying life, sports, and hobbies by their glasses and contact lenses”.

At Dr. Lewis’ elegantly appointed LASIK and Epi-LASIK Philly offices, patients can choose from a variety of advanced vision correction treatments. In addition to performing laser eye surgery, Dr. Lewis specializes in implantation of collamer intraocular lenses and is renowned as one of the leading Philadelphia Visian ICLs experts. 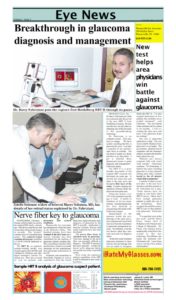