John Grablewski’s vision returns to normal after his office-based YAG capsulotomy.
Argon Laser Trabeculoplasty can replace drops in glaucoma
For years Ophthalmologists have used lasers to treat glaucoma. It was always considered a last resort prior to surgery.
Now studies suggest laser treatment should be used before drops in some cases.
Aqueous humor [see below] is produced by the ciliary body. It passes over the lens, through the pupil and over the iris. It drains from the eye via the trabecular meshwork. An Argon laser is applied to the trabecular meshwork to treat glaucoma.
When aqueous is produced too quickly or when aqueous is removed too slowly glaucoma results. If left untreated glaucoma can irreversibly damage vision.
Dr. Barry Fabriziani claims, “It would be better if patients could feel the increase in eye pressure. They would come to us and we could treat them before permanent visual loss occurred.”
Glaucoma remains a major National Health problem in the United States. Nearly 15% of the population over sixty has glaucoma. Populations with even higher risk include diabetics, smokers, and relatives of glaucoma patients.
Glaucoma can also attack the young. Although rare, children can be born with the disease. Males in their thirties and forties can have this serious condition. Afro-American males have the highest incidence of this sight-threatening disease.
“We must rely on routine examinations or glaucoma screenings to make the diagnosis”, explained James Lewis, MD. “Asking someone to take eye drops two or three times a day is problematic. Medications are expensive and most have side effects. Patients can easily forget to take drops. Compliance is a major problem.”
English Ophthalmologists were the first to consider argon laser treatment as first line management for patients with glaucoma. The excellent safety profile of this laser made it a reasonable alternative to drops. Studies supported their theory.
American specialists were skeptical but their independent research supported their conclusion. “We learned that argon laser treatment for glaucoma can be as safe and effective as drops”, Lewis continued. “Studies proved lasers were more cost effective for the patient and less expensive for the National Health Service in England.”
Fabriziani added, “The convenience of providing this service in the office is appealing to patients”. “I am relieved because their eye pressure is controlled and patients don’t have to buy drops and remember to take them throughout the day.”
Lewis said, “The lasers have become smaller, more efficient and affordable. Having them in the office is an incredible convenience for patients. It allows us to practice better medicine.”

Eye cross-section explains office-based laser treatment for glaucoma.
Hospital visits and lab tests are no longer required for removal of an “after”cataract
Interviews by CONNIE CORBIN
Patient comments the first day YAG laser was performed in the office:

Joan Dakota – “delighted the laser was available in the office…easier for my daughter, I spent hours at the hospital for the other eye”

Walter Capper – “Thanks doctor, can’t we do both today?”

Harold Bonenberger – “is it over, that’s it?…that didn’t hurt at all”

Mary Jane Moore – “nothing to it”

Marilyn Black – “that was very quick and easy, I want the other eye done”

Mary Cushman – “no pain, not boring and not more fun in the
hospital… being at the hospital was a frustrating experience”

Margaret Janson – “This was easy”

Dr. Elaine Husted – “This setting is always much nicer, your staff is always lovely”

Marilyn Black is comfortable after her successful office laser surgery.

Dr. Lewis believes in using the latest technologies and techniques in order to provide his laser eye surgery Philadelphia patients with the best possible vision correction results. This is why, in addition to LASIK, he also performs Epi-LASIK in Bucks County / Philadelphia. Other state-of-the-art treatments offered by Dr. Lewis include implantation of Visian ICLs in Philadelphia. 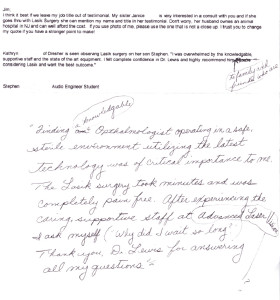 Stephen
Jim; I think it best if we leave my job title out of testimonial. My sister Janice is very interested in a consult with you and if she goes thru with LASIK Surgery she can mention my name and title in her testimonial. Don’t worry, her husband owns an animal hospital in NJ and can well afford the cost. If you use photo of me please use the one that is not close up I trust you to change my quote if you have a stronger point to make! Kathryn of Dresher is seen observing LASIK surgery on her son Stephen. “I was overwhelmed by the knowledgeable supportive staff and the state of the art equipment. I felt complete confidence in Dr. Lewis and highly recommend him to family and friends who are considering LASIK and want the best outcome”“Finding a knowledgeable Ophthalmologist operating in a safe, sterile environment utilizing the latest technology was of critical importance to me. The LASIK surgery took minutes and was completely pain free. After experiencing the caring, supportive staff at Advanced Laser Vision I ask myself (“Why did I wait so long?)” Thank you, Dr. Lewis for answering all my questions” Stephen Audio Engineer Student