Fig 2: Another mark is applied for safety.

Fig 3: Disposable Moria One Microkeratome Ring is applied to the eye for stabilization and suction.

Fig 6: Mastel Laser Clean Room is applied for ocular fixation and control of the surgical microenvironment.

Fig 8: The appearance of the cornea after the excimer laser has refined its architecture.

Fig 10: Fiber Optic Light Source (Mastel) inspects the interface and final corneal placement.
The entire LASIK procedure lasted five minutes. The refinements in surgical technique and advances by pioneers like Moria, Nidek, Mastel, and Jose Barraquer are responsible.
These photographs were taken during LASIK surgery on April 25, 2001. They were webcast live via
http://www.lasikTV.com.

Patients received unedited videotape of their surgery.
No images were displayed without permission from the patient, and no identifying marks were revealed.

Our thanks go to the patient sharing this educational material.

LASIK shown live on the Internet
iHateMyGlases.com began recording surgical videotapes for teaching purposes. It didn’t take long before patients began asking for their own copy.
Because patient privacy has always been an important consideration iHateMyglasses.com has a formal image release policy. You can find this document on the web site and in all pre-operative surgical packets. Naturally, photographs, videotape, digital image capture, and webcasts are by permission only.
While some find these images unsettling, the majority is intrigued. This week, one patient said, “It looked too good. There was no blood, nothing disgusting. The whole procedure seemed somewhat unreal.” Dr. Lewis said that was the best thing he had heard all day!

As a highly regarded Philadelphia Epi-LASIK and LASIK surgeon, Dr. Lewis strives to deliver the best possible vision correction results for each one of his patients. In addition to performing LASIK eye surgery in Philadelphia, Dr. Lewis has many years’ experience treating Philadelphia ICLs patients. In fact, he was one of the first surgeons in Pennsylvania to perform implantation of these sophisticated collamer lenses. 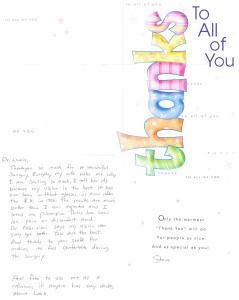 Steve
Thanks To All of You, Only the warmest "Thank You" will do For people as nice And as special as you! Steve Dr. Lewis, Thank you so much for a wonderful Surgery. Everyday my wife asks me why I am smiling so much. I tell her it's because my vision is the best it has ever been without glasses or even after the R.K. in 1996. The results are much better then I ever expected and I need no pilocarpine. There has been no pain or discomfort and Dr. Fabriziani says my vision can only get better. You are the best. And thanks to your staff for making me feel comfortable during the surgery. Steve Feel free to use me as a reference if anyone has any doubts about LASIK.